Locally Made Through the Centuries 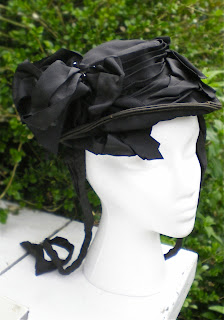 Last week was an eventful one for the Thread team, including two discoveries of items in our collection that were locally made here in Portsmouth! The first is a late 19th-century hat, which has long been a team favorite and featured in several previous posts. It turns out to have been made by Mrs. B.F. Lombard, a prominent milliner who made and sold hats at her shop on Congress Street in the 1890s. She later moved to Vaughan Street, where she kept her shop into the nineteen-teens. Our hat is a fine example of Victorian elegance, made of black silk with large grosgrain ribbon bows, and a few broken stems where previous adornment is now missing.

Our second discovery is more elusive - a pair of blue textured wool shoes (now faded and almost green), with the name "Samuel Hawks" and "Daniel Street" printed inside. The New Hampshire Gazette and

Portsmouth Journal of Literature and Politics advertised his shoes (and Daniel Street store) from 1824-1831, but our shoes appear to be of an earlier style. As our research continues we hope to find out more about the story (and time line) behind them!

Stay posted, and in the mean time enjoy these pictures of Portsmouth's historical craftsmanship!