The feathered cape or pelerine - a forgotten fashion accessory! 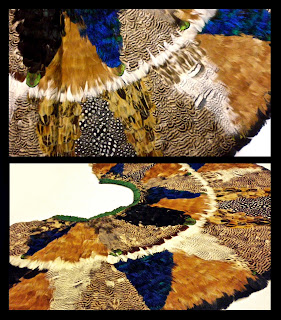 A few weeks ago we posted an entry about new finds in the Strawbery Banke collections, including this unusual feathered capelet, which, based on style and form, indicated it was created during the first quarter of the 19th century.


This strange little piece is made from rows upon rows of tiny feathers stitched to an unknown fabric, is lined with green cotton and closes with a single hook and eye at the neck. In addition to peacock feathers, it appears to be decorated with feathers from other domestic birds that may have been locally owned. At first it appeared that this was a very unique piece, but a bit of research shows that feathered capes were not all that uncommon in the 1820s or -30s. 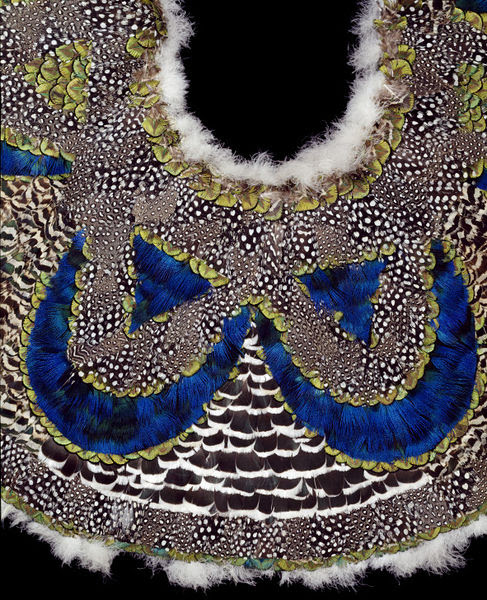 Our first discovery was this cape from the Victoria and Albert Museum, shown in 19th Century Fashion in Detail. Like ours, its feathers "are from a range of domestic fowl" that could easily have been found in London at the time it was made--either internally from aviaries or imported from various ports.
This example is of a more common style called a pelerine, which has two long panels (lappets) extending from the front of the capelet. However, the panels are not shown in any of the V&A's photographs.


Next, Cherished Possessions: A New England Legacy, led us to this pelerine from Historic New England. The description of this cape suggests that the fashion may have drawn its inspiration from traditional Hawaiian capes, after the king and queen of Hawaii visited England in 1824, making the production timeline spot on. This specific example is more exotic, with some feathers possibly having been imported, or taken from birds in European aviaries.

The Metropolitan Museum owns a pelerine, which they believe to be inspired by Native American designs.

Another capelet is owned by the British Museum, along with two from Hawaii or Polynesia, for comparison:

At the end of our research, it does not seem that Strawbery Banke's feather cape is very unusual at all for a fashion accessory of the 1820s or 30s. The issue remains that there is no consensus on where such capes come from; some sources suggest that they were made in Europe or America from local or imported materials, while other records say they were made and sold by Chinese artisans in South Africa (the provenance of a pelerine at the Smithsonian and also of several at the Peabody Essex Museum, supports this). A few capes, in addition, are recorded as having been made by Native Americans in the Great Lakes region, who sold them as tourist items into the 1860s. None of this is certain; and while feathered capes abound in the physical record, their origins are elusive!