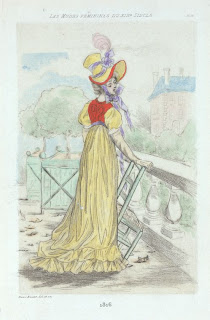 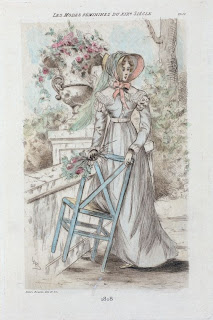 This is a really interesting site - could get lost in it for ... on Twitpic 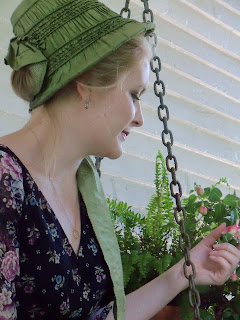 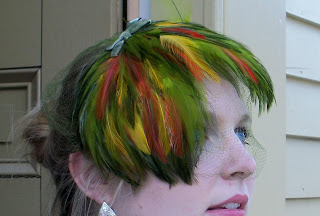 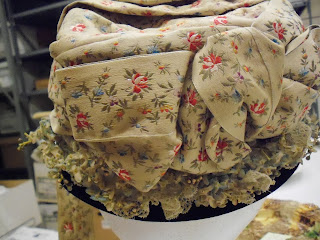 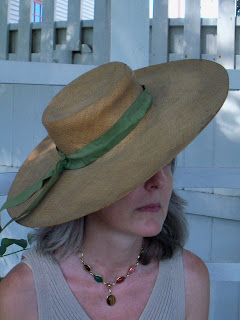 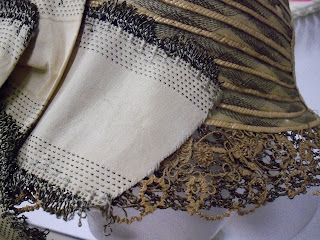 With Royal Ascot approaching, we are thinking about hats, hats and more hats. We have dusted off some of our favorites and brought them out (briefly) from storage. 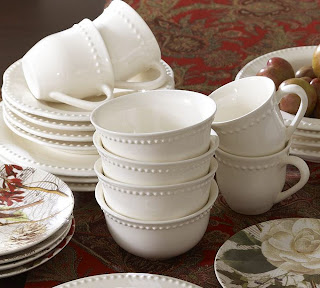 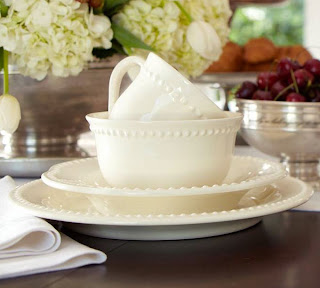 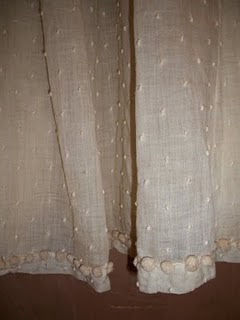 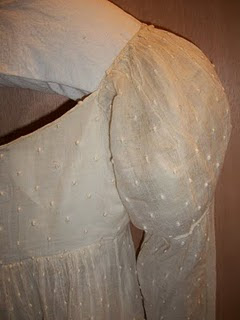 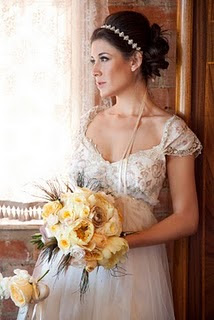 Oh how style flies! It is amazing to see the patterns of fashion and style that appear and re-appear in the world of today. In a previous post, I introduced our “Emma” gown; a classic empire style gown donated to the museum in 1987 that we have come to call “Emma” (based on Jane Austen’s work that has been popularized through film) as well. The gown is from ca. 1810s and was worn by Rachel Morgan, daughter of General Jacob Morgan, when she was married in Philadelphia.

The gown is entirely hand-sewn and is constructed of white “spotted” muslin with a silk taffeta under dress, a rare survival. This “spotted” muslin creates tiny dots on the fabric, adding to it texture and dimension. The parallels with renowned contemporary designer Claire Pettibone ‘s wedding gown, also known as “Emma” are striking even over the span of nearly two centuries. While walking through Pottery Barn recently, dots appeared in front of me on a dinnerware set that was labeled the “Emma” pattern. I had to post it here because the coincidence was too amazing not to share! As you can see, on the dinnerware pattern, the dots line the pieces very simply, adding just a hint of texture to this otherwise simple, yet elegant, set. The textured dots are used the same way in “Emma” adding dimension to the gown in an unfussy, effortless air.
Posted by silkbrocade at 11:04 AM No comments: 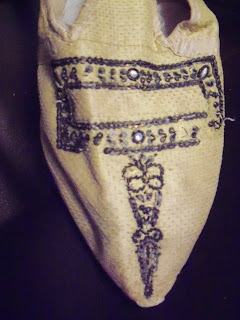 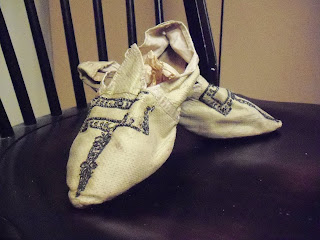 Lydia Waite Williams, wife of ship captain Israel Williams of Salem, MA was likely the owner of the c.1785 shoes shown here. Among her many activities, she was as one of the founding members of the Salem Female Charitable Society. The society, formed in 1801 and incorporated 1804, was actually one of many that existed throughout the Early Republic.

The members of female charitable organizations were generally middle- to upper-class women who did not need to work and who, after the Revolution, found themselves with more free time than they had before. The sheer number of societies formed within the first decade or so of the Early Republic “gives some indication of the readiness with which women filled their new leisure time with philanthropy.” The ideal of “republican motherhood” – the belief that women had the civic duty and responsibility for the upbringing of virtuous children who upheld the ideals of republicanism – remained until the early 1800s and probably played a role in some of the goals of these charitable organizations. Although republican motherhood meant a new important role for women, it did not mean increased freedom and women’s rights.

The charitable groups allowed women to act in public, certainly, but they were still limited in the services they could provide. Most female charitable societies could provide assistance to a family only if the husband was dead or abandoned them; aged spinsters and young female orphans also fell under the umbrella of permitted assistance. If the group were auxiliaries to men’s societies, they could extend their work to prostitutes and prisoners. The Salem Female Charitable Society “undertook the care of Female Orphans or Children from three to ten years of age whose parents are not capable of supporting them . . . at the age of ten or eleven years, the girls were placed in reputable families, to dwell with and serve [them] until . . . the age of eighteen years, or marriage within that age . . . employed in such domestic business and labor as the household head deemed proper.” Even then, the options for work for unskilled women were limited to sewing, laundry, and domestic service until factories hired them. These young girls were placed under the care of a governess, while widows and destitute women relieved money annually from a fund created by the Salem women. Custom would have allowed these groups to tend to the sick poor, but that type of work was almost impossible by the lack of medical knowledge and procedures.

These quasi-public groups should not be mistaken for a movement toward women’s rights. Female charitable societies had to work around culturally accepted mores in order to accomplish even the simplest of goals. Women had very few property rights, so groups made sure to incorporate itself so property could be held. Because a husband had the right to demand and control any money that was given to his wife, the societies tended to choose an unmarried woman into the office of treasurer to avoid any legal complications. Interestingly enough, the Salem Female Charitable Society elected Abigail Mason Dabney – a married woman – as treasurer for the first few years the group was active. Most of these societies, rather than challenge beliefs about women’s rights and capabilities, accepted them as part of the culture at the time.

This is illustrated by a sermon preached before the Salem Female Charitable Society by Thomas Bernard, the minister of the North Church in Salem. The sermon, delivered at the First Church in Salem and July 6, 1803, embodied the opinions of the time. There are several beliefs about women that Bernard presents in his sermon: mothers are the most instrumental in the instruction of children; charity is, by nature, feminine; and this role is the true right of women. Bernard believed, like many of his contemporaries, that it was the mother who played the largest role in the proper upbringing of children: “They know best house to govern them, and make them attentive to what they should learn. They are, from a great variety of causes their most endeared and instructive teachers.” The importance of the role of mothers grew throughout the 18th and 19th centuries, as did the belief that it was the mother’s responsibility to raise good children. Not only is motherhood a natural role, but also virtue and charity are more often than not personified as being female. Poets and authors constantly made reference to these traits as being feminine by nature. “Females,” Bernard says, “have encouraged charitable associations by their persuasive efforts to soften the harder hearts of men . . . They, at the present time, associate themselves, for the purpose.” Here he reinforces the belief that women were the gentler, softer, more delicate, and emotional sex.

In the latter part of his sermon, Bernard makes his most obvious reference to women’s rights:

Suffer me to add here, that the ELDEST DAUGHTERS of Families cannot in a more worthy and amiable manner distinguish themselves, than by being faithful and affectionate associates with their MOTHERS in the education of the younger children. They live in their young hearts next to their Mother, and next to her, they can the most successfully teach and guide them in the way in which they should go. These are not the fancied, but the real “Rights of Women.”

He is clearly referencing Mary Wollstonecraft’s “A Vindication of the Rights of Woman,” published only eleven years before in 1792. Wollstonecraft argues that women are not inferior to men, but only appear to be so because of a lack of equal education; she also suggests that women should be viewed as rational beings rather than emotional ones, and that social order should be founded on reason (a reflection of Enlightenment philosophy). In one sentence, Bernard sums up early 19th century beliefs about women and the role of charitable societies.

And so we are able to catch a glimpse into the world of Lydia Waite Williams. Her membership in the Salem Female Charitable Society is a reflection of her economic and social position – which we have already been able to surmise from her husband’s success. Her London shoes of silk with elaborate spangles in imitation of the more commonly placed central bow reflect the growing interest in Neo-Classicism of the era. Indeed there is a contemporary feel about them. (Compare with London shoes of several decades earlier by James Davis, found on the pages of this blog.) Recently donated to the Strawbery Banke Museum Textile and Costume Collection, it is clear that the exploration of early 19th century Salem society helps contextualize items and artifacts and is essential to the study of material culture.
Posted by silkbrocade at 10:07 AM 1 comment: 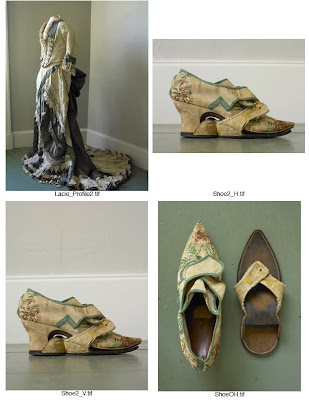 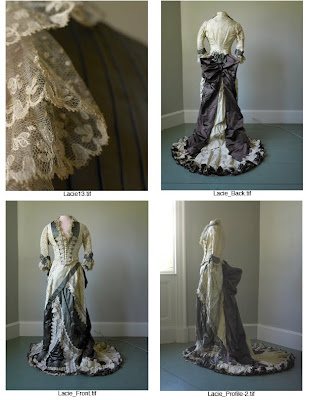 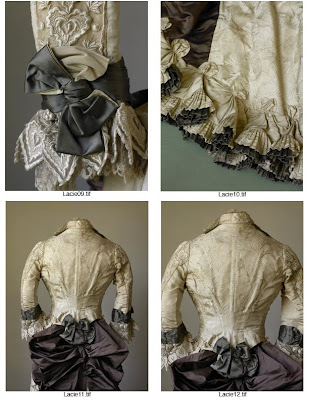 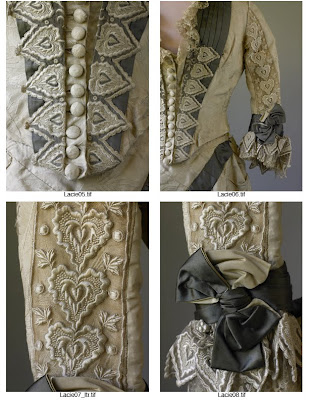 Images of "Lacie" in the bow room at the Goodwin House, Strawbery Banke Museum (strawberybanke.org)
Posted by silkbrocade at 7:48 AM 2 comments:

The Story of "Lacie" 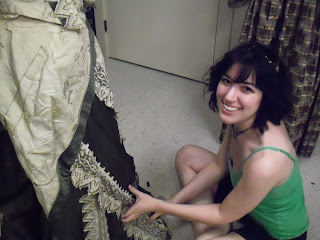 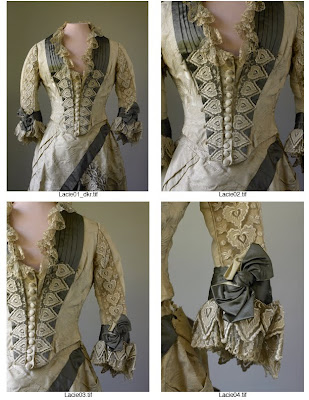 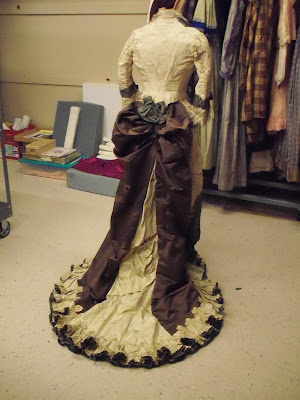 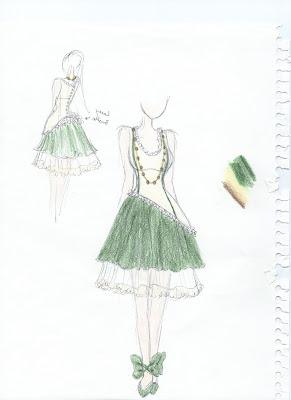 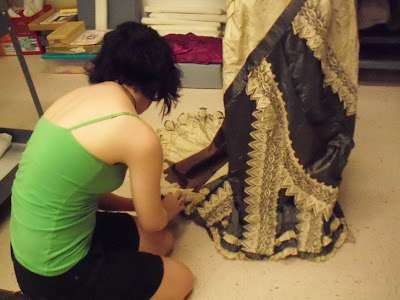 Summer of 2010, Seacoast designer Sarah Beth Johnson toured the textile and costume collection at Strawbery Banke Museum, in search of her inspiration for Passion for Fashion. She discovered "Lacie." While touring the collection with curatorial staff, Sarah came upon a luxurious late 19th century skirt, replete with layers of lace and an eye catching large gathered "bow" of green and brown silk. The skirt had been separated from its bodice, but in the course of her tour, Sarah spotted it hanging in a garment wardrobe. "Lacie" was reunited in all her extravagant glory. Unfortunately, the dress has no known provenance, but due to its design, material and color palette, and as a high style example of its type, "Lacie" will be on view in the upcoming exhibition.

The images shown here follow "Lacie" from our workroom/storage area, to Sarah's inspired design for a fun formal dress with a ballerina twist and finally, her transformation in the eyes of New York photographer, Ellen McDermott (ellenmcdermott.com) of "Lacie" into a stunning, graceful figure in the bow room of the Goodwin Mansion at Strawbery Banke Museum, October 2010.
Posted by silkbrocade at 10:31 AM No comments: